The romance of the Cup and all that cobblers. We’re stood on a temporary metal framed terrace at FBK’s ground in Karlstad as KBK’s ground (a field basically) is under a lot of snow. The pitch today is a plastic one so the game is on. KBK are in Division 1 Norra, which is 2 levels below Östersunds FK who finished 6th in Sweden’s top league and gave several top teams a run for their money in the Europa League a few years back after beating my team Hammarby in the final of the Svenska Cupen.

The Swedish Cup is a bit odd if truth be told. The preliminary matches are played in the season (usually in mid-August) BEFORE the one that the final takes place in. If you get through these initial matches, you’re then in a 8 x 4 teams set of leagues, with the winner of each league through to the quarter-finals and then the usual knockout. The weather plays an important part in Swedish football, so the main league season runs from April to November, and the Cup matches in the mini-leagues take place over a week or so in mid to late February. Got that? Good.

The match started pretty evenly and KBK had the better chances to take the lead, but it was ÖFK who were lucky to get a penalty (if it was in the area and a foul, I’d be surprised). Anyway, straffsparken (penalty kick) was given and dispatched. ÖFK pretty much controlled the remainder of the first half until in the last minute of the half when a long ball broke led to a cross that was swept home after a neat pullback. 1-1 at HT was a bit tough on KBK, but showed signs that they wouldn’t lie down.

Post half-time bollocking, ÖFK edged further into the match and had a lot of possession, but did very little with it and again from a fine long ball pass, KBK were presented with the opportunity to take the lead as ÖFK’s keeper came out to reach the ball ahead of KBK’s unlikely-numbered 77 striker who watched the keeper half-control and let loose the ball, allowing him to collect, run towards goal and score. With 78 mins gone, things got worse for ÖFK as both strikers combined from another break and one provided a perfect cross just out of the reach of the ÖFK keeper to nod home to make it 3-1. A giant-killing definitely on the cards. To add the shite icing on the cake of doom, ÖFK were reduced to 10 men on 82 mins after an elbowing incident that wasn’t entirely obvious, but given immediately by the ref. “Du dumma domare” was the shout from the not overly happy away support as all hope appeared to have buggered off. ÖFK played much better with 10 men and reduced the arrears after a neat flowing move and a precision finish, but KBK never looked like conceding another and so the score finished 3-2.

KBK must now beat Halmstad in the final match and hope Sirius don’t win or lose against ÖFK. Complicated, eh????

PS Some mention must be made to the driving skills of the numerous folk razzing around on the frozen lake next to the pitch, which provided amusing interludes when the match was going through the motions, which wasn’t very often to be fair. The pictures taken on my phone have been photographed again by a camera as the stupid mobile refused to attach to anything via bluetooth. Slow handclap for technology there. 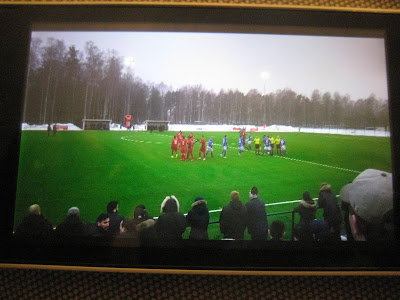 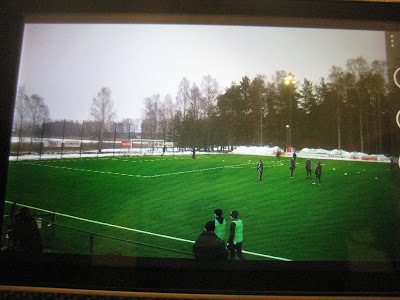 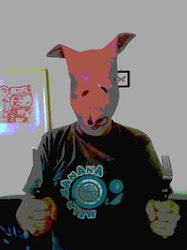